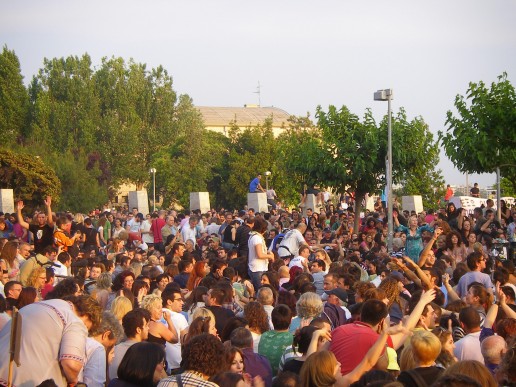 The article that appeared today in the following Greek blog

written by an eye witness who spent the day with protesters around the White Tower, Salonica’s pride, is touching. It is touching because readers will never be able to see the real picture if they read a reporter’s story or listen to a correspondent doing their job. This is journalism at its pristine form, with no alterior motives other than the desire to convey real emotions.

What do protesters who sit at the foot of a 500 year-old symbol of slavery and freedom think about? The article proceeds to say the following:

Two days have passed since demonstrations started throughout Greece. Many things have been said and written about them the moment they began, even during the week leading up to them, that reeked of conspiracy and suppression.

The writer states he does not adhere to a political ideology but is just one of the thousands of indignant citizens, who fill the square. He is one of many, one in the midst of diversity. The people who have come to protest are from all walks of life: university students, the unemployed, families with their children, well-dressed women, hippies, left-wingers, right-wingers, centrists.

This combination is what is so alarming to political parties whose leaders realize  they no longer hold the reins, no longer can hold the sheep in paddocks. They fear that people have awoken and are enraged. 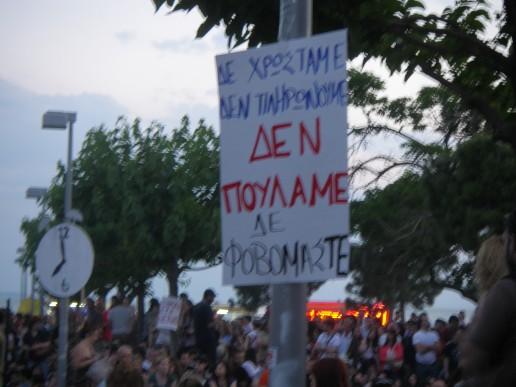 A nucleus has formed at the center of the protesters, with a makeshift area of interest where people take the floor and through a microphone express their views, vent their anger. All around, thousands sit quietly listening to each speaker in turn. Applause is heard at times. Sometimes other speakers interrupt to disagree. Some laugh, some chant. What is important is that there is a sense of democracy and peace that pervades the whole process.

For the first time, the writer feels he is in a civic church, a place of absolute democracy. A 39 year-old unemployed man speaks into the microphone and shares the tragedy that is his life, shares his anguish. A father asks those there to rebel everyday in small ways. A mother whose daughter has just graduated from college and faces unemployment urges everyone to stay and fight in Greece and not abandon it in the hopes of finding a better future elsewhere.

No politician could predict this. They see people ushering away all those who try to send messages originating from a political party, all those who have not understood that the country is knee-deep in corruption. Such protesters have understood the reality of Greece’s situation and can no longer be manipulated.

Music is heard coming from small groups of friends. Tents have been set up. Others listen to music, others play the guitar, others sing. Optimism everywhere rears its pretty head. The conviction that they can do something about the crisis they were placed in by politicians, that they can turn things around, together, united under no flag but the national flag is evident.

The political system in Greece is shaking and will not remain placid. It will try anything in its power to break up this democratic union, to erase the optimism that has made its way into people’s hearts through the media. The key to success lies in rationality, sensible and peaceful protest.