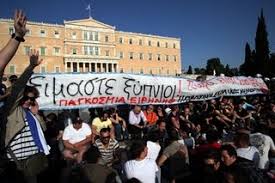 Following a day of feverish speculation that he would step down to facilitate the formation of a coalition government, Prime Minister George Papandreou said in a televised speech to the nation on Wednesday night that he had no intention of leaving power but would conduct a cabinet reshuffle and request a vote of confidence in Parliament today.

The comments came just hours after officials in ruling PASOK and conservative opposition New Democracy confirmed that the two party leaders had been in talks aimed at forming a coalition government.

Papandreou said he had made a fourth effort to win the broad political consensus that has been demanded by Greece’s creditors, the European Union and the International Monetary Fund, who pledged the country 110 billion euros in loans last year and are now discussing the possibility of a second bailout. But, the premier said, his “genuine efforts to create consensus” had been exploited by the main opposition party and turned into a “public relations exercise.”

Papandreou accused the opposition of leaking details of a preliminary conversation with the leader of the main conservative opposition, Antonis Samaras. “Today I made new proposals to the leaders of all parties to achieve the necessary national consensus…But before the substance of the matter had been discussed, certain conditions were made public that were unacceptable,” Papandreou said, adding that such an agreement would have kept “the country in a prolonged state of instability and introversion while the crucial national issue remains that of tackling the national debt.”

Late yesterday night Samaras said in a televised speech that his party could not cooperate with PASOK as “they have lost the trust of both the Greek citizens and the markets.”

Samaras added of Papandreou, “If he can govern, he shouldn’t have asked us for support; if he can’t, he should call elections.”

Popular Orthodox Rally (LAOS) spokesman Costas Aivaliotis had earlier backed the idea of an “ecumenical” government that would include the nationalist party. “We need a government of cooperation; it is what people have been asking for for the last 15 months,” he said. “We cannot have people gathering in [Syntagma] square and not have something tangible to give them.”

The leader of the Coalition of the Radical Left (SYRIZA), Alexis Tsipras, said that a coalition government would be “undemocratic.” He said the only solution would be to call elections.