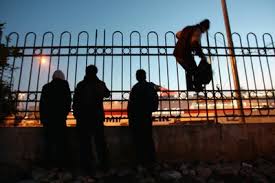 The financial turmoil in Europe is creating social as well as economic problems in a number of countries and especially Greece, which is suffering its worst recession in decades.

Greece is an unwilling entry point to about 80 percent of Europe’s illegal immigrants, and many Greeks are starting to resent their presence at a time of high unemployment and cuts in social services. To make matters worse, the capital, Athens, is experiencing a rise in violent crime — a problem that’s also being blamed on the immigrants.

On a recent afternoon, scores of homeless Afghans gathered in the central Athens square called Victoria. All came here with the idea that they’d find work, but they’re all unemployed.

«Everyone back home told me that when I came here, people would take care of me,» 25-year-old Farhod Bahteri says. Now, he and his wife and two sons are all homeless in Greece.

It’s a sad story — one of hundreds — but many Athenians are losing sympathy. They blame a big rise in violent crime here on immigrants. Police data shows that homicides and robberies doubled between 2009 and 2010.

Tasos Boulis, the Greek owner of a kiosk in the square, says he’s been robbed several times and sees violence every night.

«They rob houses, buses, trains — anything. And no one cares,» Boulis says. «If we complain, we’re racists. I expect something awful to happen, like it did in Norway, because people here are under way too much pressure from this.»

The pressure is turning some Athenians to Chrysi Avgi — or Golden Dawn — a far-right nationalist party that has taken up policing these neighborhoods, sometimes brutally.

Ilias Panagiotaros is a Chrysi Avgi spokesman, and he says the police are letting illegal immigrants take over Athens. He says he was attacked by 30 Afghans in a cafe last year. If immigrants are complaining about having no work or money in Athens then they should leave, he says.

«They should go back in their countries, where they were nice and safe, and they had nice jobs, and everything was perfect — in Pakistan, in Somalia, in Algeria and everywhere, if they don’t like Athens and have such problems,» Panagiotaros says.

Chrysi Avgi won a seat on Athens municipal council last year and Panagiotaros says his party will be in parliament soon.

Chrysi Avgi supporters were out in force in the neighborhood in May, shouting, «foreigners get out of Greece!» The occasion was a memorial service for a Greek man stabbed to death by Afghans a few days before.

In the riots that followed, gangs of Greeks attacked immigrants, and a Bangladeshi man was stabbed to death. Ahmad Babul, 29, also from Bangladesh, watched as a friend was attacked.

«Suddenly eight, nine people coming and beat him,» Babul says. He says his friend was taken to the hospital bloody and with broken teeth.

For now, life is calm in Victoria Square, despite the underlying tension. Every evening, Afghan children fill the place. A 5-year-old boy named Hamidullah is on his own because his dad is in jail. A 10-year-old girl named Donya sells packets of cheap cigarettes.

Orestis, who didn’t want to give his last name, owns the second kiosk in the square.

«Look, I’m not against immigrants coming here to make a better future,» he says, «but there are just too many of them.»

Orestis says he feels bad for the kids. But these days, he says, he feels even worse for his neighborhood. It’s turned into a ghetto with too many angry people.