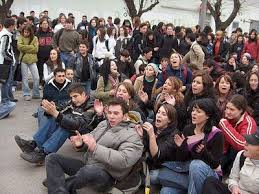 them. The article that follows sets out the facts as strikes, demonstrations and students taking over faculties and schools will fill disgruntled youths’ agenda.

At least 45 university departments occupied by their students in Greece, gearing up for another winter of discontent.

Only days after the new education bill was voted into law, bringing sweeping changes to Greece’s higher education system (immense funding cuts, abolition of the academic asylum etc), students on the ground have been organising their response. So far, more than 45 university departments have been occupied by their students, following General Assemblies in each of them; many more are due to follow in the next few days.

A student demonstration has been called in Athens for Thursday, September 1st.