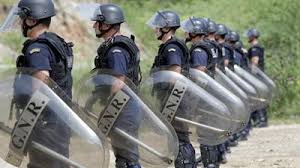 What is Eurogendfor and what is it doing in Greece?

According to their Official website, which you can find here: http://www.eurogendfor.eu/

«The European Gendarmerie Force (EGF) is an initiative of 5 EU Member States – France, Italy, The Netherlands, Portugal and Spain – aimed at improving the crisis management capability in sensitive areas. Since Wednesday, 17th December 2008, the High Level Interdepartmental Committee Meeting (CIMIN) decided to welcome the Romanian Gendarmerie to become a full member of the EGF. Therefore the EGF consists from that moment of 6 member states.

EGF responds to the need to rapidly conduct all the spectrum of civil security actions, either on its own or in parallel with the military intervention, by providing a multinational and effective tool.
The EGF will facilitate the handling of crisis that require management by police forces, usually in a critical situation, also taking advantage from the experience already gained in the relevant peace-keeping missions.
Based in Vicenza in the «Generale Chinotto» barracks, the EGF HQ is now developing a comprehensive and coherent operational system, which will permit to be ready in case of prompt deployment to crisis areas.
EGF goal is to provide the International Community with a valid and operational instrument for crisis management, first and foremost at disposal of EU, but also of other International Organizations, as NATO, UN and OSCE, and ad hoc coalitions.»

From the same site and under Frequently Asked Questions, and I quote:

«Q.1.i. Who gives the mandate for operations in which the EGF is involved?

Ans. The EGF will always be deployed on a clear legal basis. Usually the mandate will be based on relevant UN Security Council Resolutions or on political guidelines from EU or other international organisations that intervene in the field of crisis management.»

Ans. In accordance with the mandate of each operation, the EGF can perform a broad spectrum of activities related to its own police capability, such as:
– performing security and public order missions;
– monitoring of and advice for local police in their day-to-day work, including criminal investigation work;
– conducting public surveillance, border policing and general intelligence;
– performing criminal investigation work, covering detection of offences, tracing of offenders and their transfer to the appropriate judicial authorities;
– protecting people and property and keeping order in the event of public disturbances;
– training of police officers as regards international standards;
– training of instructors, particularly through co-operation programmes.
«

Ok I might not have a complete understanding yet but I can just about make out the outline of their operations. The other question remains ananswered:

…what is Eurogendfor doing in Greece?

Greek online blogs (all in Greek I am afraid but I list some below) are circulating reports that Eurogendfor has arrived in Greece this week. No official response to confirm or deny this, where is the truth?

How can one know the facts and why are the Greek mainsteam media not commenting on this issue?

I typed the word Eurogendfor in the BBC News, Guardian, The Independent search engines, no results came up.

For months the austerity program unfolded by the Greek government as a result of the IMF/EU requirements for budget deficit reduction has resulted in vibrand protest movement expressed through public protests & multiple strikes. Even retired policemen, retired army reservists have gone protesting as organised groups via their unions and associations. The Greek Riot Police (MAT) have been beating up protesters for weeks. Is it conceivable that EGF will be mobilised in Greece?

I hope the reports are unfounded and have only been spread to monitor public reaction, or could it be a hoax? No Greek in their right mind would authorise the deployment of such force against protestors any such politician would be named a traitor, this is how the Greek psyche works, surely they know. It would finish PA.SO.K.

But if Eurogendfor is in Greece but not to fight the protestors then we have to ask again what they are doing in Greece?

They have finally managed to bring in invading forces without as much as a shot fired. If you still think we are living in a free and democratic world when governments bring in foreign mercenaries to crush the morale of citizens who wish to express their dissatisfaction – to put it mildly – then you are much mistaken. The case of Greece is just one in the many more to come. The implementation of the New World Order is moving smoothly. If you are still sitting comfortably in front of your TV set, then there is something seriously wrong with the way you choose to avert your eyes from the truth.