Μετάβαση στο περιεχόμενο
ΑρχικήMacedonia is, was and always will be Greek – anything else you hear is called usurpation

The story is simple. History has been written and rewritten but even laymen cannot lie enough to disprove the evidence that presents itself.

For all those who do not realize what has been going on these past few decades between Greece and the Former Yugoslav Republic of Macedonia (FYROM), you should make the time before contemporary history gets rewritten.

Skopje has not been dormant lately. They have spent billions (God knows where they came from, but then again, many have suspicions as to which foreign hands bore gifts) on books, monuments, inaugurations, celebrations and festivities christening Alexander a Macedon with Slavic roots and anointing Skopje the ancient capital of Alexander’s empire. They have renamed almost every state building in Skopje ‘Alexander’ or ‘Philip’, erected statues in central squares the size of small colossi, and managed to make themselves the laughing stock of historians dressed up as ancient foot soldiers – helmets, shield, short tunics and all.

Their press releases are equally provocative. «We will own Chalkidiki» was the encouragement given by FYROM officials to their citizens to buy property in the Greek peninsula. President Ivanov in 2009 spoke of the Greater Macedonia, a vision many of his compatriots share, in his interview for the German weekly Der Spiegel. Maps depicting this vision have appeared sporadically and though Greece’s inept or criminally negligent politicians have not denounced these monstrosities, Bulgarian scholars have (seeing as their interests are being threatened as well, according the the map below) by suing Skopje in UNESCO, a fact which has remained absent from the press. 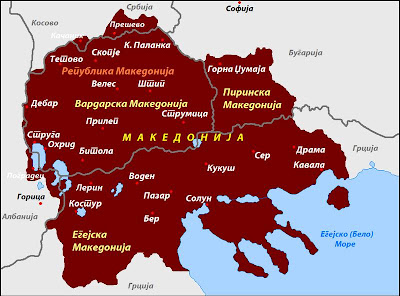 The crux of the matter, nonetheless, is that all attempts at modifying historical facts through publications, construction efforts and lobbying does not change the unshakeable truth distinguished scholars defend, and I stress the word ‘distinguished’ vehemently.

The Ashmolean Museum of Art and Archaeology is a University Museum and a Department of the University of Oxford. One could easily hypothesize that if someone were to get their facts right, it would be the scholars at Oxford. The exhibition that opened its doors on April 7 of this year through till the end of August was very aptly entitled «Heracles to Alexander the Great: Treasures from the Royal Capital of Macedon, a Hellenic Kingdom in the Age of Democracy.» Yes, the word ‘Hellenic’ referred to the noun Macedon within that sentence.

More than 500 objects were put on display. These artefacts were found at Aegae, «the ancient capital of Macedon. They rewrite the history of early Greece and tell the story of the royal court and the kings and queens of Macedon, descendants of Heracles whose rule culminated in the empire of Alexander the Great.»

The first video gives viewers a general tour of the exhibition itself, but it is the second video I wish to draw your attention to, for it is there that Robin Lane Fox, eminent historian, Fellow of New College, Oxford and University of Oxford Reader in Ancient History succinctly states that

Macedon is a Greek-speaking kingdom in northern Greece, populated by people using Greek names, Greek months of the year, worshiping Greek gods. Those who live in Skopje and say that that is Macedon and Alexander’s homeland are as ignorant and outrageous as if someone were to say that Oxford University was really in Belarus and Oxford was Minsk.

Get your facts right everyone and realize that what Skopjans are undertaking in the long run is nothing less than usurpation bordering on criminal intent. The fact that their shouting can be heard more distinctly in no way makes what they utter the truth.

The Reaper, in no mood to call anyone «my sweet» today