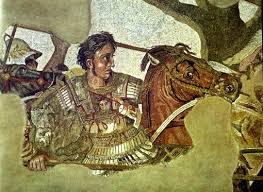 Following the publication of the edited version of the after-dinner talk that I gave in October, a formal complaint was made to my employer (to which a polite reply was made, stressing the importance of academic freedom), and I received an e-mailed message from the United Macedonian Diaspora (which I thought, because of its name, must be a Greek organisation until I read what it had to say), together with a number of other e-mails. Many of these were merely abusive, but this didn´t surprise me, because I know from experience that when people hold strong beliefs that are based on faith not fact, and they are shown that these beliefs cannot be true, this is distressing to them, and they will very often become agitated, as they cling to their beliefs even more vigorously. None of the messages that I received addressed the issue that I raised in my talk in Melbourne, the proposed erection of the statue of Alexander the Great in Skopje. Two of them were, however, more thoughtful, and I have had some mild and civilised exchanges with their authors, as we define our positions.

Some of the points that were made were what I would call ‘diversionary’, such as the statement that the present population of the Greek province of Macedonia has nothing in common with its population in ancient times, being ‘colonisers’, referring to the fact that many of them were brought there from Turkey in the 1920s during the exchange of populations which led to Muslims being removed from some areas of the Balkans, and Christians from some parts of Asia Minor. I have pointed out to the persons who made this point that this is not an accurate way to describe what happened; and it is certainly not relevant to the issue that brought me into this debate (see below). Similarly, I know that in northern Greece some of the things that have been done to the Slav minority who live there, such as discouraging them from using their own language, cannot be defended (and I wonder what has happened to any Greek speakers who still live in the FYROM, but no one has told me anything about them). But I am a specialist in the ancient world, not in modern history, and again this is not relevant to the point that I am trying to make.

Anyway, I composed a reply, and sent it to everyone who had contacted me, answering some of the points that had been made, and emphasising that I was not well informed on the details of what had happened in the period of Ottoman domination or the twentieth century, although I am in fact learning more. For example, I have been looking at a book called The Contest for Macedonian Identity 1870-1912 by Nick Anastasovski, which is very scholarly and better documented, particularly in relation to Ottoman sources, than anything else that I have previously read. But it fails in its promise to show how a ‘Macedonian Identity’ began to be constructed in the 19th century. And one of the problems is that the word ´Macedonian´ can be interpreted in different ways (I am reminded of the character Humpty Dumpty in Lewis Carroll´s Alice through the Looking Glass, who said ´When I use a word, it means just what I choose it to mean …´).

One delightful experience was my being directed, apparently seriously, to a web site produced by two scientists in Skopje, who claimed to have shown that the middle section of the Rosetta Stone (196 B.C.), the section occupying the space between the text that was presented in hieroglyphics and the text that was presented in Greek, was not, as has been generally supposed, written in Middle or Ptolemaic Demotic Egyptian (close to Coptic), but in the original ‘Macedonian’ language, which the Ptolemies, being Macedonians, were supposed to have used. This was combined with the suggestion that these original ‘Macedonians’ had been driven out of Macedonia by the Romans, but returned some seven centuries later to their homeland. Thus we would have a connection between the Macedonians of antiquity and the present inhabitants of the FYROM.

It is amazing that this world-shattering theory has not made the front pages of the international newspapers, even though, to judge from the comments that I have found on the web, some people in the FYROM are convinced by it. There are, however, obvious weaknesses that anyone, not necessarily a specialist in linguistics, can spot easily. In the first place, the web site dismisses the perfectly credible translation from Demotic which is provided by the British Museum. Also, the number of ‘Macedonian’ words that have been ‘identified’ by this ‘scholarly’ study is small (the authors do not offer a translation of the complete text, just a selection of supposed ‘Macedonian’ words). I discussed this with a linguist of my acquaintance, who said that if he studied the text in the same way, he would be able before too long to prove that some words in it were Finnish, Chinese or (Heaven forbid!) Bulgarian.

The nature of the language spoken by the ancient Makedónes is hard to evaluate, because so little of it remains (I will ignore the claim concerning the Rosetta Stone, and the suggestion that there are inscriptions of an early date in one or more non-Greek languages which have been discovered, but are locked up in Greek museums and kept secret). We have about a hundred and fifty words that are specifically described as ´Macedonian´, most of them from the Lexicon of Hesychius (5th century A.D., but incorporating earlier work). The material is insufficient for a firm judgement to be made (and it should be remembered that Hesychius and his predecessors were collecting rare or unusual words, rather than listing ones that were the same everywhere), but it is clear even from this limited sample that the Macedonian language was no further from Attic Greek (which became the standard form) than the Cretan or Spartan languages, which would certainly be called Greek.

Having said this, I can restate my position and develop it a bit. The origin of the Makedónes is unclear, but they seem to have arrived in the area around Aigai (Edessa & Vergina) by the eighth century B.C. They pushed out or absorbed the Bottiaioi who lived in that region or to the south of it, and other groups such as the Pierians and Mygdonians. Over the next two centuries they settled there and expanded their territory, and although they still had a number of separate tribes, a firm succession of kings was established, and this made them stronger than other more divided groups. Some of the names of early kings that we have may be legendary, but with Perdikkas I (7th century) we seem to be on firmer ground. The territory under the control of the Makedónes continued to expand, and by the beginning of the 5th century one of their kings, Alexander I, had begun to issue coins with his own name written on them in Greek.

Several passages that survive in Greek authors of the fifth and fourth centuries suggest that the Macedonians were regarded by the southern Greeks as ´different´. This is not surprising, since they had arrived on the scene much later than the groups that had entered the peninsula during the Bronze Age and moved southward, but it is clear from the evidence that they were, although perhaps grudgingly, accepted as being Hellenes. The situation is less clear with regard to their neighbours on the north, in an area that cannot be exactly defined, but is approximately equivalent to the territory of the Former Yugoslav Republic of Macedonia. These were called the Paionians, and there were frequent conflicts as they tried to expand into Macedonian territory. At the accession of Philip II to the throne of Macedonia the Paionians joined with the Illyrians in an attempt to take advantage of the inexperience of the new king, but Philip drove them back, defeating them on more than one occasion.

When I spoke of this in my after-dinner speech, I described this event as a ´conquest´, which was completed by Philip´s son Alexander III. This was an overstatement. The Paionians were defeated, but their territory did not become a part of Macedonia. This is shown by the fact that the Paionian kings began issuing coins bearing their own names (written in Greek of course) during the reign of Philip II, and when Alexander started making his conquests, they provided a separate contingent of cavalry in his army. They certainly remained separate from Macedonia until the Roman conquest, as their continued issuing of coinage, first in the name of their kings, and finally in the name of the Paionians themselves in the early second century B.C., shows. And in the immediate aftermath of that conquest they were still regarded as separate, if we can believe the Roman historian Livy, who tells us (XLV, 29) that the Dardanians were not allowed by the Romans to take control of Paionia, although, as they claimed, it had once been theirs, because it had belonged to the last Macedonian king Perseus (sub regno Persei), and all Perseus´s subjects had now been granted political freedom (libertas).

In later years the name ‘Macedonia’ was applied to a much larger area. It included some land to the north (Paionia), to the west and to the south (even including southern Greece for a while until a separate Roman province of Achaia was created). And in the centuries before the Ottoman conquest the geographical extent of ´Macedonia´ (by now a purely administrative district, with no separate ethnic identity), varied considerably at different times. But now we are moving away from the issue that brought me into this naming dispute. This is that the territory of the FYROM was not, either in the fourth century B.C. or for many centuries after that, a part of Macedonia (except perhaps for a very narrow strip along its southern border), and that the erection of a statue of Alexander the Great in Skopje can never be justified, because it is based on a distortion of history by a people who, I am sorry to say, are trying to create a false identity for themselves.

Professor John Melville-Jones, is a Winthrop Professor in Classics & Ancient History, from the University of Western Australia