Μετάβαση στο περιεχόμενο
ΑρχικήIF THERE’S ONE ARTICLE YOU DECIDE TO READ ABOUT GREECE, IT’S THIS ONE

Democracy vs Mythology: The Battle in Syntagma Square

I have never been more desperate to explain and more hopeful for your understanding of any single fact than this: The protests in Greece concern all of you directly.

What is going on in Athens at the moment is resistance against an invasion; an invasion as brutal as that against Poland in 1939. The invading army wears suits instead of uniforms and holds laptops instead of guns, but make no mistake – the attack on our sovereignty is as violent and thorough. Private wealth interests are dictating policy to a sovereign nation, which is expressly and directly against its national interest. Ignore it at your peril. Say to yourselves, if you wish, that perhaps it will stop there. That perhaps the bailiffs will not go after Portugal and Ireland next. And then Spain and the UK. But it is already beginning to happen. This is why you cannot afford to ignore these events.

The powers that be have suggested that there is plenty to sell. Josef Schlarmann, a senior member of Angela Merkel’s party, recently made the helpful suggestion that we should sell some of our islands to private buyers in order to pay the interest on these loans, which have been forced on us to stabilise financial institutions and a failed currency experiment. (Of course, it is not a coincidence that recent studies have shown immense reserves of natural gas under the Aegean sea).

China has waded in, because it holds vast currency reserves and more than a third are in Euros. Sites of historical interest like the Acropolis could be made private. If we do not as we are told, the explicit threat is that foreign and more responsible politicians will do it by force. Let’s make the Parthenon and the ancient Agora a Disney park, where badly paid locals dress like Plato or Socrates and play out the fantasies of the rich.

It is vital to understand that I do not wish to excuse my compatriots of all blame. We did plenty wrong. I left Greece in 1991 and did not return until 2006. For the first few months I looked around and saw an entirely different country to the one I had left behind. Every billboard, every bus shelter, every magazine page advertised low interest loans. It was a free money give-away. Do you have a loan that you cannot manage? Come and get an even bigger loan from us and we will give you a free lap-dance as a bonus. And the names underwriting those advertisements were not unfamiliar: HSBC, Citibank, Credit Agricole, Eurobank, etc.

I did not see a pair of sunglasses not emblazoned with Diesel or Prada. I did not see a pair of flip-flops not bearing the logo of Versace or D&G. The cars around me were predominantly Mercedes and BMWs. If anyone took a holiday anywhere closer than Thailand, they kept it a secret. There was an incredible lack of common sense and no warning that this spring of wealth may not be inexhaustible. We became a nation sleepwalking toward the deep end of our newly-built, Italian-tiled swimming pool without a care that at some point our toes may not be able to touch the bottom.

That irresponsibility, however, was only a very small part of the problem. The much bigger part was the emergence of a new class of foreign business interests ruled by plutocracy, a church dominated by greed and a political dynasticism which made a candidate’s surname the only relevant consideration when voting. And while we were borrowing and spending (which is affectionately known as “growth”), they were squeezing every ounce of blood from the other end through a system of corruption so gross that it was worthy of any banana republic; so prevalent and brazen that everyone just shrugged their shoulders and accepted it or became part of it.

I know it is impossible to share in a single post the history, geography and mentality which has brought this most beautiful corner of our Continent to its knees and has turned one of the oldest civilisations in the world from a source of inspiration to the punchline of cheap jokes. I know it is impossible to impart the sense of increasing despair and helplessness that underlies every conversation I have had with friends and family over the last few months. But it is vital that I try, because the dehumanisation and demonisation of my people appears to be in full swing.

I read, agog, an article in a well-known publication which essentially advocated that the Mafia knew how to deal properly with people who didn’t repay their debts; that “a baseball bat may be what’s needed to fix the never ending Greek debt mess”. The article proceeded to justify this by rolling out a series of generalisations and prejudices so inaccurate and so venomous that, had one substituted the word “Greeks” with “Blacks” or “Jews”, the author would have been hauled in by the police and charged with hate crimes. (I always include links, but not in this case – I am damned if I will create more traffic for that harpy).

So let me deal with some of that media Mythology.

And the biggest myth of them all: Greeks are protesting because they want the bail-out but not the austerity that goes with it. This is a fundamental untruth. Greeks are protesting because they do not want the bail-out at all. They have already accepted cuts which would be unfathomable in the UK – think of what Cameron is doing and multiply it by ten. Benefits have not been paid in over six months. Basic salaries have been cut to 550 Euros (£440) a month.

My mother, who is nearly 70, who worked all her life for the Archaeology Department of the Ministry of Culture, who paid tax, national insurance and pension contributions for over 45 years, deducted at the source (as they are for the vast majority of decent hard-working people – it is the rich that can evade), has had her pension cut to less than £400 a month. She faces the same rampantly inflationary energy and food prices as the rest of Europe.

A good friend’s grandad, Panagiotis K., fought a war 70 years ago – on the same side as the rest of Western democracy. He returned and worked 50 years in a shipyard, paid his taxes, built his pension. At the age of 87 he has had to move back to his village so he can work his “pervoli” – a small arable garden – planting vegetables and keeping four chickens. So that he and his 83 year old wife might have something to eat.

A doctor talking on Al Jazeera yesterday explained how even GPs and nurses have become so desperate that they ask people for money under the table in order to treat them, in what are meant to be free state hospitals. Those who cannot afford to do this, go away to live with their ailment, or die from it. The Hippocratic oath violated out of despair, at the place of its inception.

So, the case is not that Greeks are fighting cuts. There is nothing left to cut. The IMF filleting knife has gotten to pure, white, arthritis-afflicted bone. The Greeks understand that a second bail-out is simply “kicking the can down the road”.  Greece’s primary budget deficit is, in fact, under 5bn Euros. The other 48bn Euros are servicing the debt, including that of the first bail-out, with one third being purely interest. The EU, ECB and IMF now wish to add another pile of debt on top of that, which will be used to satisfy interest payments for another year. And the Greeks have called their bluff. They have said “Enough is enough. Keep your money.”

My land has always attracted aggressive occupiers. Its vital strategic position combined with its extraordinary natural beauty and history, have always made it the trinket of choice for the forces of evil. But we are a tenacious lot. We emerged after 400 years of Ottoman occupation, 25 generations during which our national identity was outlawed with penalty of death, with our language, tradition, religion and music intact.

Finally, we have woken up and taken to the streets. My sister tells me that what is happening in Syntagma Square is beautiful; filled with hope; gloriously democratic. A totally bi-partisan crowd of hundreds of thousands of people have occupied the area in front of our Parliament. They share what little food and drink there is. A microphone stands in the middle, on which anyone can speak for two minutes at a time – even propose things which are voted by a show of thumbs. Citizenship. 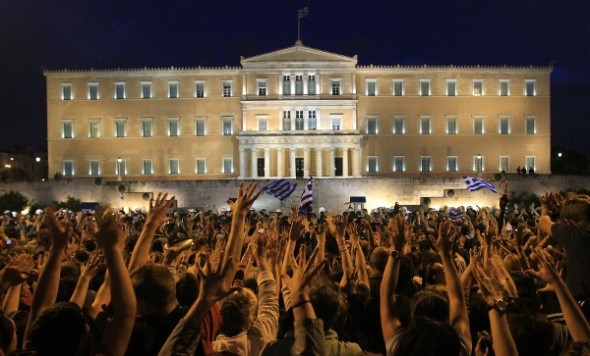 And what they say is this: We will not suffer any more so that we can make the rich, even richer. We do not authorise any of the politicians, who failed so spectacularly, to borrow any more money in our name. We do not trust you or the people that are lending it. We want a completely new set of accountable people at the helm, untainted by the fiascos of the past. You have run out of ideas.

Wherever in the world you are, their statement applies.

Money is a commodity, invented to help people by facilitating transactions. It is not wealth in itself. Wealth is natural resources, water, food, land, education, skill, spirit, ingenuity, art. In those terms, the people of Greece are no poorer than they were two years ago. Neither are the people of Spain or Ireland or the UK. And yet, we are all being put through various levels of suffering, in order for numbers (representing money which never existed) to be transferred from one column of a spreadsheet to another.

This is why the matter concerns you directly. Because this is a battle between our right to self-determine, to demand a new political process, to be sovereign, and private corporate interests which appear determined to treat us like a herd, which only exists for their benefit. It is the battle against a system which ensures that those who fuck up, are never those that are punished – it is always the poorest, the most decent, the most hard-working that bear the brunt.  The Greeks have said “Enough is enough”. What do you say?

Help us by spreading this message to others – don’t let the media airbrush it out of existence, like they have done with the people of Madison, Wisconsin and the Indignados in Spain. Use the comments below (no registration is needed) to express your solidarity with the people of Greece. If you have any questions, again use the comments and I will do my best to answer. Raise the matter with people in power. Ask questions. Talk about it in the pub. Most of all, wake up before you find yourself in our situation.

Nassim Nicholas Taleb is the Lebanese-American philosopher who formulated the theory of “Black Swan Events” – unpredictable, unforeseen events which have a huge impact and can only be explained afterwards. Last week, on Newsnight, he was asked by Jeremy Paxman whether the people taking to the streets in Athens was a Black Swan Event. He replied: “No. The real Black Swan Event is that people are not rioting against the banks in London and New York.”

Μια σκέψη σχετικά μέ το “IF THERE’S ONE ARTICLE YOU DECIDE TO READ ABOUT GREECE, IT’S THIS ONE”